M&A Value Raised Dramatically in May in China, Especially in Online Video Industry

In May, Energy & Mineral M&A Takes the Most, and Electronic & Opto-electronics Equipment Industry Has the Largest Transaction Value
In May, the closed M&As take place in 20 Grade 1 industries such as Energy & Mineral, Real Estate, Telecom & Value-added Services, Food & Drinks, Electronic & Opto-electronics Equipment, Machinery Manufacturing and Bio/Healthcare. As for the transaction number, Energy & Mineral happened the most with 12 deals, namely 17.4%, Real Estate comes second with seven deals closed, namely 10.1%, and the Telecom & Value-added Services reported six M&As, namely 8.7%.
As for the transaction value, the four Electronic & Opto-electronics Equipment deals took the lead with US$523.68M, namely 15.5%. The largest transaction in May was TCL’s acquiring of 30.0% equity of CSOT Corporation, which pushed the industry transaction value to the top. Food & Drinks came second with five disclosed deals valued at US$488.65M, accounting for 14.4% of the total transaction value. Mengniu Dairy’s acquiring of China Modern Dairy Holdings is the largest in the industry. On May 7, Mengniu Dairy acquired 26.92% equity of China Modern Dairy Holdings held by KKR and affiliated enterprise of CDH Ventures with HK$3.18B (about US$409.00M), becoming the largest shareholder of the company. The M&A will guarantee Mengniu Dairy with quality and quantity of high quality milk. Internet industry cam third with two deals valued at US$448.00M, accounting for 13.2% of the total transaction value.
As for the average transaction value, Internet industry came first with US$224.00M, Electronic & Opto-electronics Equipment ranked second with US$130.92M, and Food & Drinks occupied the third place with US$97.73M. 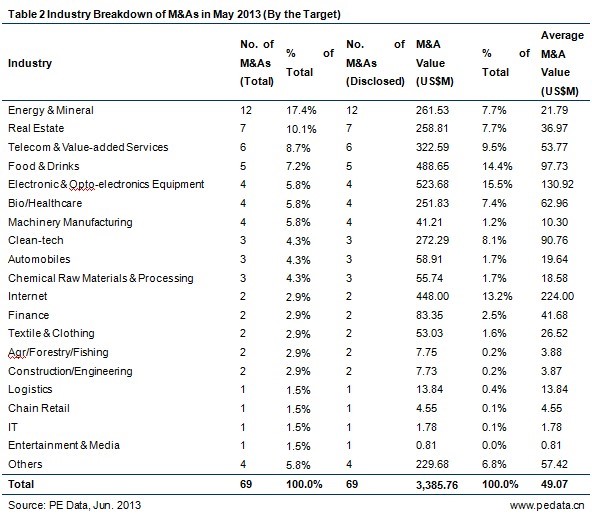 Seven Oversea M&A with Transaction Value at US$329.00M
According to statistics by PE Data of Zero2IPO, in May, 2013, there are seven cross-border M&As in China with six oversea M&As and one foreign funded M&A, totally value at US$329.00M. The largest deal in the category this month is Fosun Pharmaceutical’s acquiring of Alma Lasers. Founded in 1999, Alma Lasers is a cosmetic medical apparatus enterprise headquartered in Israel. China is one of its largest markets. Fosun Pharmaceutical aims to establish a high-end research and manufacture ring platform based on Alma Lasers in a bid to further explore its internationalization path. 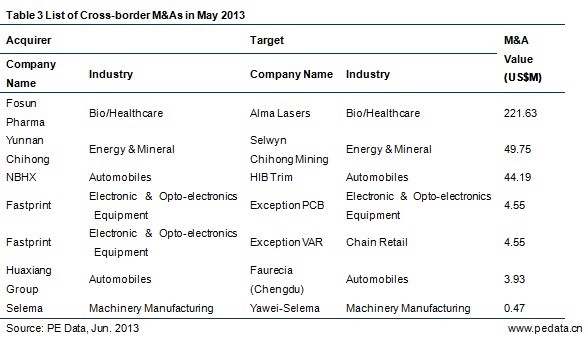 
In May, 25 VC/PE-backed M&As take place in 14 Grade 1 industries such as Telecom & Value-added Services, Electronic & Opto-electronics Equipment, Machinery Manufacturing, Clean-tech, Automobiles and Food & Drinks. There are three exit M&As in May. In May 7, Baidu’s subsidiary IQIYI acquired PPS with US$370.00M. After that, Qiming Venture Partners, LBI and Ceyuan Ventures exit. IQIYI and PPS are complementary in their business. After the M&A, IQIYI will gain a significant increase in user base with low contact ratio in users. The deal will also give the company an advantage in users both at PC end and Mobile end. The past two years have seen an accelerated integration in Online Video industry. According to statistics by PE Data of Zero2IPO, from 2005 to May, 2013, there are 12 M&As in the Online Video industry, four of which happened in 2012. More Internet giants are entering the industry with abundant funds at hand, and the internal integration is also happening, which lead to rise in concentration ratio in the Online Video industry. In March, 2012, Ucoo acquired Tudou Holdings. In May, 2013, IQIYI acquired PPS. And Sohu also shows interests in PPTV. The setup in the industry is increasingly clear now. 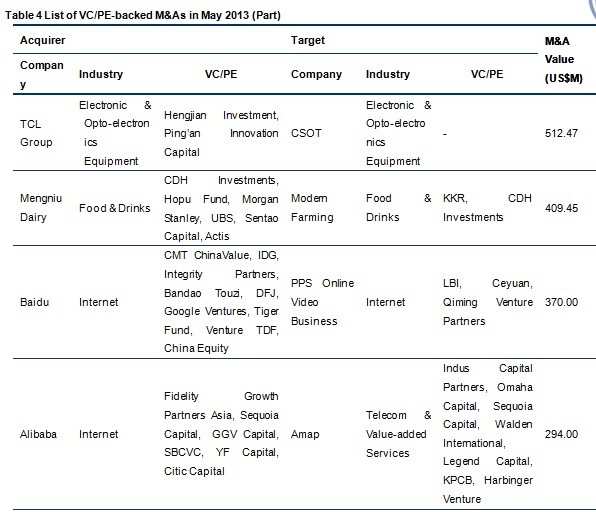 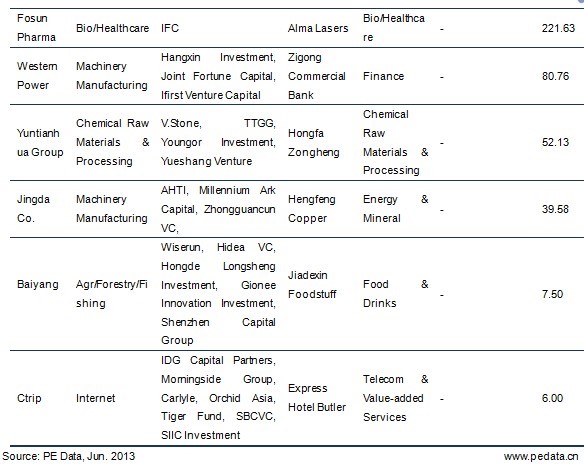